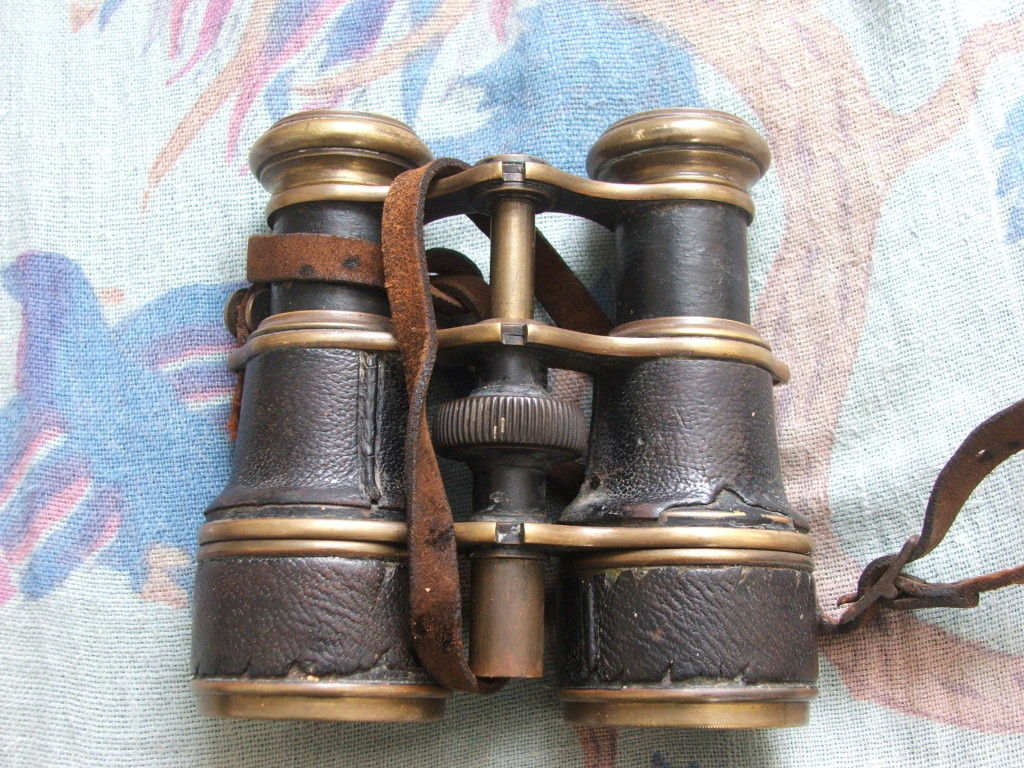 I dressed up like a pirate recently, as part of the costume I wore my grandads old binos. A guy told me they were opera glasses. I laughed at him because there’s no way my grandad was into opera. So I googled them, and he’s right. I found similar looking pairs online from the early 1900’s. So I wonder if they belonged to his grandfather. Henry Thomas Fuller. My dad remembers these binos from when he was a kid so my grandad must have had them a while.

Thing is, after doing the family history research, I can’t help but wonder if these opera glasses were part of the ‘theatrical items’ stolen by Henry Thomas Fuller in 1906? I hope not! …but it’d be quite fitting for a pirate to be wearing swag round their neck! Perhaps I should be careful what I go looking for!

Thomas was a Mariner in the Merchant Navy and first went to sea as an apprentice in 1811. His Merchant Seaman Record gives the following info:
No of: 76052.
Register Ticket: 50.
Age when Ticketed: 49.
Name: Thomas Fuller,
Born at: Margate, County of Kent, 4th day of Sept 1795.
Capacity: Seaman.
Height: 5ft 4 3/4 inches.
Hair: Dk Brown.
Eyes: Dark Brown.
Complexion: Dark.
Marks: Not any.
First went to sea as: Apprentice.
In the Year: 1811.
Can Write: Yes.
Has served in the Royal Navy: No.
Has been in Foreign Service: No.
When unemployed, resides at: Margate.
Issued at: Ramsgate, 21st day of Dec 1844.

Mary Ann Overton was born in Hoo nr Chatham, Kent c1797. Mary was baptised on the 3rd Sept 1797 at Saint Werburgh, Hoo, Kent and her parents were given as Charles Overton and Mary.

Thomas and Mary had the following children:

Charles Francis Fuller was born 9th Sept 1822 in Margate, Kent (according to his Merchant Seamans record). He was baptised in the Parish of St Johns, Margate 13th Oct 1822. His parents were given as Thomas and Mary Fuller of Margate and his fathers profession was listed as ‘Mariner’.

On October 22nd 1843 banns of Marriage were called at the Parish Church of Ash, Kent between “Charles Francis Fuller of this Parish, Bachelor and Mary Jane Spratt of this Parish, Spinster.”

I think Mary was from Ash and I found the following baptism in the Parish of Ash nr Sandwich, Kent:
June 7th 1818:  Mary Jane, daughter of John and Mary Spratt, Abode: Ash, Fathers Profession: Labourer.

In 1844 Charles Merchant Navy Record gave the following details:
No of 115,425
Charles Francis Fuller
Age in 1845: 23
Age when Ticketed: 22
Can write: Yes
Born at: Margate, Kent 9th Sept 1822
Height: 5ft 4
Complexion: Fair
Marks: Pock Marked
Hair: Dark Brown
Eyes: Dark Blue
First went to sea as: a boy in the year 1834
Has served in the Royal Navy: No
Has been in Foreign Service: No
When unemployed resides at: Margate
Issued at: Ramsgate, 28th day of Dec 1844

On the 6th January 1857 Charles was killed in the English Channel whilst on the Lugger the Victory, which went to save the American ship the Northern Belle. Nine men were lost when the Victory capsized:

Subscriptions in aid of these poor men’s widows ad orphans are urgently solicited.

From the Kentish Gazette:
American ship ‘Northern Belle’ of 1,100 tons burthen, from New York, seen to be in eminent peril, and which afterwards stranded on the Foreness Rock, was caught in a fearful sea, and plunged down in an instant with all her crew. the suferers were:
John Smith, aged 63 years.
George Smith, aged 29
William Emptage, aged 52
John Emptage, aged 29
Issac Solly, aged 46
Abraham Bashbridge, aged 35
Charles Fuller, aged 34
Henry Paramor, aged 27
Frederick Batt, aged 22

“Such a calamity as this is not known to have occurred here before; may such never occur again. This tablet is also intended as a grateful tribute to the benevolence of persons, not only in this town and neighborhood, but in London and other distant places, who have so generously responded to the public appeal made in behalf of the widows and orphans, and have, by subscriptions, amounting to two thousand one hundred pounds, declared their sympathy with a class of men engaged in a most important but adventurous avocation. “Whoso is wise will ponder these things.”

Links:
The shipwreck of the Northern Belle and the loss of the Victory.
The Wrecking of the Northern Belle, an article by Mick Twyman published by the Margate Historical Society in December 2001.
A new plaque unveiled in tribute to the men who died on the Victory.
Article from the Isle of Thanet Gazette.
Dedication Service of the Victory Lugger Memorial Stone at Margate.
A letter regarding subscriptions to the widows and orphans affected by the sinking.
A Boatmans Tales, article about the sinking of the Northern Belle.
Newspaper article from The Perth Gazette and Independent Journal of Politics and News (WA : 1848 – 1864).
Margate, Kent genealogy and family history resources

Henry Thomas Fuller was born in 1843 in Ash, Kent to Charles Francis Fuller and Mary Jane Spratt. His birth was registered in the Eastry registration district  (which Ash was a part of between 1837-1941.)

At the time of the 1851 census Henry lived in Princes Court, King St, Margate:

In 1853 when Henry was 14 he lost his father who died on the Lugger the Victory, which went to save the American ship the Northern Belle. This left Henry as the the eldest child of 7 siblings. See blog post.

In 1868 he married Elizabeth Ann Edwards in Thanet. I believe Elizabeth already had an illegitimate daughter called Sarah Jane Edwards born 1866 in Thanet and baptised 15.7.1866 at St John the Baptist Church, Margate.

Sarah Jane can be seen staying with Elizabeth’s sister Mary Christiana Edwards (who had then married and was known as ‘Christiana Batchelor’) in 1871. Sarah Jane Edwards was listed as her niece age 4.

Henry and Elizabeth had the following children:

I found the following in the Kentish Gazette 26 April 1870 referring to Henry and his mother Mary Jane Fuller (also known by her middle name):

Margate:
Assaulting a Constable-At the Borough Magistrates sitting on Wednesday; a widow named Jane Fuller was charged before George E Hannam; T Blackburn and J.B Flint Esqrs with assaulting Police Constable Chas. Harlow in the executing of his duty, on the 16th inst. Fined 10s and 8s 6d costs, or 14 days hard labour.

The son, Henry Fuller, had been brought up on the previous Monday on charges of being drunk and assaulting police constables Millgate and Harlow in the execution of their duty, and sentenced to 7 days for the first and 21 days for the 2nd offence.

So I guess his mother set an example then!

Jan 5th 1904: Henry still up to mischief age 66:
Tried before A.J.Tassell, and others. Committing Magistrate: H.B. Hammond, Esq, Ramsgate.
Henry Fuller, age 66, labourer.
Offence as charged in the Indictment: Feloniously stealing one sheet and four waistbands, together value 4s., the goods of the Guardians of the Poor of the Isle of Thanet Union, on the 5th December 1903, at Minster, Thanet.
Jury’s verdict: Guilty.
Sentence or Order of the Court: Three months hard labour.
When tried: Jan 5th 1904.
Degree of Instruction: Imp (can read and write imperfectly) .
Date of Warrant: 8th Dec 1903.
When received into custody: 8th Dec 1903.
Particulars of previous convictions charged in the Indictment and proved in court:
Borough of Margate Petty Sessions, 31st March, 1896, two months hard labour.

1901 census for Henry Fuller and Elizabeth (both in the Workhouse at Minster.)