Emmanuel Noble was born 13th April 1855 in Dorking, Surrey (according to his Continuous Service Record)  and died 1923 in Medway. Although all the records I’ve found give his place of birth as Dorking in Surrey – frustratingly, I can’t find a birth or baptism record for him. 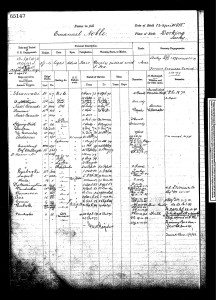 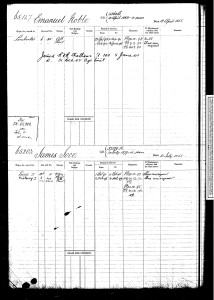 He married Emma Julia French 5th October 1879 at the Parish Church (St Mary’s) in the Parish of Chatham, Kent:

Click here for Emmanuel and Emma’s children and census records

Military history:
A Continuous Service Engagement record for the period: 13th April 1873 – 13 April 1883 gives his military Official Number as: 6 5147. He worked as a rigger and ropemaker in the Navy at Chatham Dockyard and was described as:

Shearwater: 1st Jan 1873 to 3rd April 1873; 4th April 1873 to 12th April 1873; 13th April 1873 to 22nd April 1873:
Under George Strong Nares and later William Wharton (later Hydrographer of the Navy) HMS Shearwater surveyed around the Mediterranean and the East coast of Africa. In 1873 the ship was determining the meridian distance between Gibraltar and Malta. (Reference page 47).

Flying Fish: 1st July 1874 to 8th Aug 1874. 18th June 1874:
HMS Flying Fish commissioned at Chatham, building costs amounted to £39.445. In 1874 she then sailed for a four-and-a-half year commission on the East Indies Station, and engaged in suppression of the slave trade on the east coast of Africa. The ship was at Madagascar when all the slaves who had been taken to the island were given their freedom. (ref: www.worldnavalships.com) (www.shipstamps.co.uk).

Audacious: 21st Oct 1874 to (doesn’t give a date); 1st Aug 1878 to 22nd Feb 1879:
(further info) When Emmanuel worked on this boat HMS Audacious was a guardship at Hull 1871/4. The Audacious paid off for re- commissioning as flagship on the China Station (1874/8) during which time she was involved in a collision at Yokohama during a typhoon. She then paid off at Chatham in 1878 and went back to Hull as guardship See also: www.worldnavalships.com / (Print of the ship in 1869).

Superb: 5th Oct 1880 to 19th March 1883:
HMS Superb was commissioned at Chatham for service in the Mediterranean on 4 October 1880, and remained on station for seven years. She took part in the bombardment of Alexandria 11–13 July 1882, where she fired 310 shells of 10-inch calibre at the Egyptian forts; she received ten hits in return, seven of them on her armour, with no casualties.

Comus: 6th April 1886 to 1st April 1889:
After a refit HMS Comus recommissioned 6 April 1886 for service on the North American and West Indies Station. In 1889 the ship transported scientists to observe the total eclipse of the sun off western Africa. Noted astronomer Stephen Joseph Perry died aboard the vessel from dysentery contracted ashore.

From the 1891 Census I know that Emmanuel was working from HMS Pembroke as a ‘Roper’
In the 1901 census his profession was given as ‘Rigger, HM Dockyard’ and in 1911 he was a ‘Naval Pensioner’.

2 thoughts on “Emmanuel Noble: A Ropemaker at Chatham Dockyard, Kent”